VP is to be considered the leading figure of the 20th Century’s Neapolitan School. 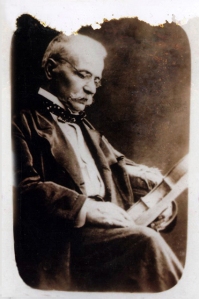 He approached Violinmaking at the age of 16, when he started an apprenticeship in the workshop of Vincenzo Jorio and he mainly dedicated himself to the construction of the Classical models, such as Stradivari, Guarneri and Gagliano, with great mastery and a marked personal touch.
His production includes more than 500 instruments of various kinds: mostly violins and violoncellos, but also violas, double basses and viole d´amore.
The Instruments bearing his label are of a very different quality-range: from Master instruments showing a beautiful craftsmanship to instruments with prefab-bodies (mostly of Czechoslovakian origin), then completed and varnished in his workshop.
One can often find the masonic symbol representing “The Eye of Providence” drawn on the label or on the inside of the belly of his instruments.

His workshop was situated in Vico Tre Regine in Naples´ Spanish Quarters.

FV was a pupil of Lorenzo Ventapane and later on, in the beginning of the Century, he 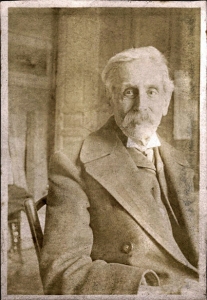 became the teacher of Altavilla and Sannino.
His production includes all kinds of stringed instruments – violins, violoncellos, guitars and instruments of the mandolin-family. Several of his instruments were made for the last member of the Gagliano family, Vincenzo, who labelled them in his name.
The Varnish of the violins and the cellos is generally of golden-brownish colour, at times towards an orange touch.

He worked in various locations in Naples: in Vicoletto Donnaregina and in Largo S. Antoniello a Costantinopoli.*

*Some sources erronously mention him as having emigrated to Constantinople in Turkey at the beginning of the Century, but as a matter of fact he never left the city – the misunderstanding comes from the “Via Costantinopoli”, a street in the historical Centre of Naples, long known as an area of Instruments- and String-dealers, close to the Conservatory S. Pietro a Majella.

RC was the son and pupil of Antonio Calace (1828-76), mainly renown for his Mandolins and Guitars, although he also made many violins, based on an easily recognizable personalized Gagliano model.
He was for the most a maker of lower budget instruments, i.e. for conservatory students, but often they are of great acoustic qualities and personality – in general, his varnish is of an amber-like colour, at times with a tiny craquelè. Furthermore, RC was a talented musician and an estimeed composer, mainly of Mandolin concertos.
He produced a large number of instruments, also thanks to his several helpers, including his son Giuseppe , who carried on the Calace-tradition with instruments mostly with a dark red-brownish varnish.
They had workshops in various locations in Naples, among others in Via Egiziaca a Pizzofalcone and in Piazza dei Martiri.

Originally GP was a Bank employee, apparently working as a Safe-Expert.

His passion for Violinmaking escalated around the turn of the Century , when he attended Vincenzo Postiglione´s workshop for some time, probably recommended by Hamma from Stuttgart.
He was a maker of great dexterity and loved wood-working, although he was not always patient with the varnishing.
The colouring of the Varnish is of a great variety, but in general it is Golden-brown, especially regarding the “Master-copies”, mainly labeled “Raffaele e Antonio Gagliano”.
The instruments around the change of the Century are commonly known as “I peperoni di Pistucci” (Pistucci’s Peppers), due to the differences in their colouring: sometimes they are dark red, sometimes yellow and other times greenish-brown.
After 1930, he would often let his instruments be varnished by his fellow-maker Bellarosa, eventually in exchange of scrolls; in fact, the two makers show a big similarity in the style of cutting scrolls.
He left a huge production of instruments (probably over a 1000 and mostly violins) of various quality, but always showing a fascinating outcome and great personality.

He worked in Via S. Maria Ognibene and in Vico Figurella a Montecalvario.*

*A curiosity regarding this last workshop address: one of his violins, that was destined to France, bears the label “Giovanni Pistucci fait a Naples – Petite rue des Petites Figures au Mont Golgatha”. 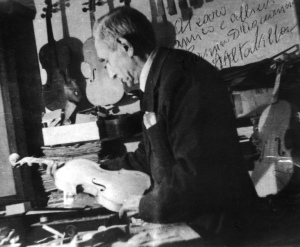 style of the Gaglianos, with a golden-brown varnish, at times moving towards a red-orange touch. His instruments normally bear his own label, except for the antiqued copies, which often have Gagliano labels.
He made instruments of various kind: sometimes they are very carefully made with exclusive materials and other times made in a hasty and slovenly manner, with “poor” materials.

He worked in the Pignasecca neighbourhood and later on in Via Mezzocannone, where he steadily carried on making violins until the end of his days.

GT was a fast and prolific maker with a great manual skills for the wood-craft; especially his many double basses are very much appreciated, but also his violins are very popular.
Just like the Calace-family, he produced instruments that would cover the lowest economical price-range, though they are made with a strong personality and mostly of good acoustic qualities.
His instruments often carry an ink inscription on the inside of the belly or on the upperblock: a cross, with the initials GMG, which stand for “Gesù, Maria e Giuseppe” (Jesus, Mary and Joseph).
His working place was in Via Sapienza, where he taught the trade to his son, Marino.
They were related to the Loveri, another important Neapolitan family of luthiers.

Towards the end of the Forties, he moved his workshop to Rome, where he worked until the end of his career.

At the age of 10, he attended the workshop of Postiglione, of whom he proclaims to be 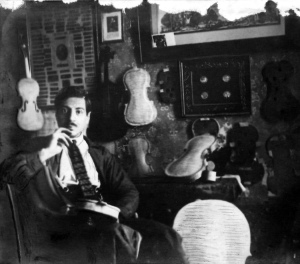 the only pupil, as printed on his labels.
After the death of his Master, AC took over the workshop and finished the uncompleted instruments.
His craftsmanship is very much influenced by Postiglione and inspired by the Classical makers, but also shows a strong individual style.
In the beginning of the Century, his varnish was usually dark red or red-brown and then, later on, light or dark brown; at times towards a greenish shine, due to a heavy use of potassium bichromate as ground.
He made about 400 instruments (of which ±300 are violins), of varying outcomes: from instruments of a beautiful craftmanship to re-elaborated prefab instruments.
In the same manner as Postiglione, his instruments often carry the Masonic symbol “The Eye of Providence” drawn on the inside of the belly.

His main workshop was in Vicoletto S. Arpino a Chiaia.

VB was the son of Riccardo Bellarosa, a dealer and restorer of stringed instruments.

At the age of 15, he started his apprenticeship under the guidance of Vitantonio in Rotello (in the Molise region).
After a 6 month stay in Mittenwald (Bavaria) in 1925, he went to Rome to refine his skills, staying for almost 4 years in the workshop of Rodolfo Fredi, then to return finally to Naples around 1930.
His varnish is generally alcohol-based and generally of a golden-brown or orange colour.
He was an ingenious maker of great dexterity and did many “Master-copies” of the Gaglianos, in particolar of Ferdinando and of Raffaele & Antonio.
He left an impressive production with probably more than 1000 instruments, presenting a very large quality-range: from beautiful Masterworks to re-elaborated prefab-instruments.
The main part of his production is represented by violins and eventually violas; no cello results, but apparently he made 3 double basses.
In the Fifties he used a brand mark with 2 sea horses on the under-rib, close to the button-hole.

His first workshop in Naples was in Via Aniello Falcone; then in his father’s place in Via Michele Cammarano and later on he moved it to the Historical centre of Naples, in Via S. Sebastiano.

Versatile Maker of a large production of all kind of stringed Instruments.
Concerning  his violins, they are stylistically close to  the Ventapane-family and often carry labels “improved” into Gagliano or Ventapane.
Varnish of a “Neapolitan-brown” color, at times very dark.
Traces of GT’s work can be found in the young Sannino, whom possibly attempted  his workshop for a while.

Vd’A was the son-in-law of Vincenzo Sannino.
He made mostly violins (and a few violas) of an orange or brown-reddish colour.
His big Passion was making miniature instruments for the “Presepe” ( Neapolitan handcraft-tradition of the Christmas crib, representing the Nativity-scene).

He worked at the Tondo di Capodimonte.

GC was a creative and inventive self-taught maker.
He made about 100 instruments of a personal style, of which mainly violins, often inlaid with ebony, mother-of-pearl and horn.
Varnish generally of a yellow-brownish or amber-orange color,  with a slight craquelè.
A particular touch of GC was a gold-reinforced hole on the rear side of the scroll, in order to “ease” the mounting of the A-string.
He also crafted a few bows of great personality with small funny inlays.

He worked in Piano di Sorrento, in the Sorrentine Peninsula.

Cd’A  graduated as violinist in 1958, at the Conservatory S. Pietro a Majella. 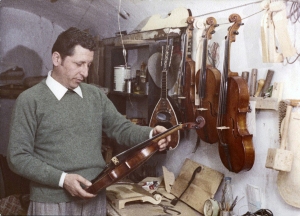 His first approach in instrument making started when visiting the workshop of Pistucci. Thereafter, around 1960, he became a pupil of Altavilla and later on, he joined Bellarosa.
He mainly produced violins and violas, with the exception of a few cellos and a viola d’amore.
He made more than 100 instruments, mostly with his label, but also copies “in the style of” makers almost his contemporaries, like Sannino, Pistucci and Contino, as well as copies of the Classic Neapolitan Makers.
The varnish of the instruments bearing his own label varies from an amber-yellow to a red-dark brown color; regarding the copies, the coloring of the varnish is in the style of the specific Master.

His workshop was in Via Costantinopoli and afterwards in the Materdei area.

GF is a pupil of Vittorio Bellarosa.
Fine craftsmanship in the style of his Master and inspired by the Gagliano-family.
A maker of  mainly violins and violas, with either Oil- or Spirit Varnish, of an orange-red or amber-yellow color.

He is still active in Casoria.